Kampala in January is a sweltering near-90 degrees - so when you see 100 people funneled into a boardroom for two days listening to a myriad of scientific and medical presentations, you know there has to be a compelling reason. Last month, it was UCSF-Gladstone CFAR co-Directors Drs. Paul Volberding and Warner Greene welcoming an audience of East African researchers to the 10th iteration of a true passion project.

"I couldn't have predicted this kind of development," Volberding admits. When he and Greene led the first inter-CFAR sub-Saharan Africa Working Group symposium in 2011 in Kampala, Uganda, it was impossible to know that it would flourish into an annual event bringing together researchers from universities both domestic and global that have helped launch institutional partnerships, the development of physical training space, and groundwork for post-graduate education in East Africa. Last month's conference was a celebration of all those achievements, and a harbinger of even more research successes to come.

Since this first event, the CFAR has hosted the nine additional interdisciplinary meetings, each with more attendees and presenters than the last, at the Infectious Diseases Institute (IDI) at Mulago Hospital, in Kampala. (One exception is the 2015 conference, held in Kisumu, Kenya.)

The conference is now a hallmark event of this long standing collaboration between UCSF, the Gladstone Institutes and the IDI, which is affiliated with Makerere University. Established in 2002 by the Academic Alliance for AIDS Care and Prevention in Africa, a group of infectious diseases experts from Uganda and North America including UCSF physician Merle Sande, the Accordia Global Health Foundation (now a part of Africare), and with initial support from Pfizer Inc., the IDI operates as a non-profit organization within the University.

This public-private partnership focused on providing high-quality care for people living with HIV/AIDS in Uganda, training the next generation of healthcare workers and researchers in East Africa, and fostering emerging investigators doing work relevant to improving the outcome of the epidemic – and UCSF and Gladstone have been there from the beginning. In addition to leadership of Dr. Sande, Dr. Volberding previously served on the Scientific Advisory Board of IDI, and Dr. Greene was invested in East Africa via his involvement with Accordia, of which he served as Executive Chairman.

“This unique combination of leadership from industry, academia, and non-profits highlights what can be done when resources and expertise are pooled,” says Dr. Volberding. “It’s a great example of diverse stakeholders coming together to make a significant, longstanding impact in a region and field from which they all subsequently benefit.”

Though the CFAR remains a part of the SSA inter-CFAR Working Group, the meetings are often held in conjunction with other international conferences, and not always in sub-Saharan Africa. Wanting to continue the momentum of the 2011 meeting, catering specifically to colleagues and trainees in East Africa with the goal of building networks and increasing partnerships across the region, Drs. Volberding and Greene decided to make this Kampala meeting an annual event – with the IDI the natural host. It also serves as an opportunity for many scientists in training to present for the first time – amongst peers, potential collaborators and mentors.

Executive Director of the IDI, Dr. Richard Brough agrees, saying, “We recognize with gratitude that UCSF and IDI have had an especially long and fruitful partnership. One of the key components for sustainable health improvements in East Africa is the training of students to produce scientific results of both local and global significance and to empower East African scientists to lead world-class laboratories working on issues seen as critical to Africa – and UCSF and Gladstone, through the CFAR program, is playing a key role in this endeavor.”

As UCSF leadership witnessed some of the challenges and opportunities associated with the work being done in the region, the CFAR began to invest in other ways. In 2014, they supported the launch of the Translational Research Lab, allowing for more post-graduate trainee positions and advanced skills training. Many of those who trained in the lab have moved into doctoral, leadership, and clinical research positions within Makerere and with other collaborating universities.

Dr. Andrew Kambugu, Director of Research at the IDI, further details the lab’s successes. “The translational lab currently houses over 15 projects in the areas of immunology, virology, pharmacokinetics and microbiology,” he says.

But the impact extends beyond the projects, says Kambugu. “The capacity within the lab complements the research lab infrastructure in the College, and at the Mulago National Referral Hospital Complex-related institutions including the Uganda Cancer Institute and the Uganda Heart Institute,” he adds, underscoring the web of relationships that the CFAR has instigated.

The tenth collaborative conference, held January 17-18, 2018, was a perfect encapsulation of the goals originally set out by CFAR and IDI. The conference was divided by area of abstract emphasis, with sessions dedicated to tuberculosis, HIV, malaria, schistosomiasis, and cancer. 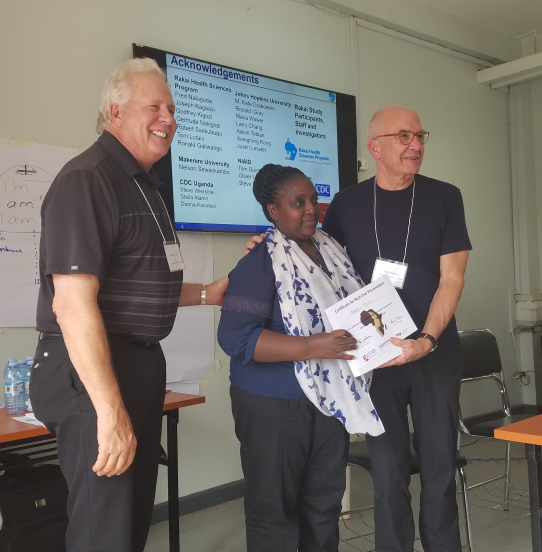 The work highlighted the increasingly interdisciplinary nature of global health. TB research ran from identifying biomarker responses of TB-HIV patients to anti-TB treatment, to the lived experience of extreme stigma that TB patients face in Nairobi city. HIV focused abstracts showed compelling findings from work dedicated to the development of assays monitoring antiretroviral drugs in resource-limited settings, to the feasibility of home-based HIV testing among refugees in southwestern Uganda.

Schistosomiasis and malaria, significantly prevalent in East Africa, are in need of unique solutions. This year’s presentations underscored some of those currently being implemented – including the effect that multiple rounds of annual drug administration has on anti-schistosome immune response among children in Western Kenya, and the impact of antimalarial treatment during pregnancy on the transfer of antibodies to newborns. Finally, those abstracts focused on cancer explored the training of community health workers to detect early Kaposi’s Sarcoma among those living with HIV, and the rates of and adherence to screening guidelines for cervical cancer among HIV-positive women in Kampala.

UCSF leadership also led discussions at the symposium, as Drs. Greene and Volberding, CFAR Managing Director Lauren Sterling, and AIDS Research Institute Director of Communications and Partnerships Dr. Larkin Callaghan led interactive sessions focused on applicable research skills – how to make an effective presentation, to draft a manuscript, to compose a conference poster, best practices for grant writing, and how to effectively disseminate your research.

As each year sees an improvement in research and an increase in exploratory partnerships, the 2019 symposium is already being planned.

“The science we’re seeing is just remarkably strong,” says Dr. Greene, “which is really encouraging. I look forward to seeing where it continues to take us.”