AMSTERDAM: “The name of the game in HIV drug development from the very start has been potency, convenience, and safety. We’re moving up and up in terms of potency…in terms of convenience, we now have one pill once a day. In terms of safety, we’ve pretty well done it, at least in terms of side effects of the major drugs we are using,” said Dr. Paul Volberding at the 2018 International AIDS Conference, during an interview with MedPage Today, discussing the development of long-acting therapies.

“However,” he continued, “this is a chronic disease – people will be treated for decades. So, we can’t be too assured about the lack of side effects after two or three years of treatment, as some may emerge years down the line.”

Dr. Volberding’s commentary was one of many highlights from UCSF and affiliate investigators in Amsterdam this July, via panels, oral abstract sessions and poster presentations, and throughout Global Village. Our international and domestic HIV experts led workshops and conversations addressing some of the greatest disparities and challenges in the field.

Launching off of CROI, which emphasized the need for greater resource allocation to explore mental health issues among those living with HIV, Susan Meffert, MD, was featured during The Intersection of Mental Disorder Screening and Treatment and HIV/AIDS in LMICs: State of the Science and Priority Directions panel. Amongst other behavioral experts, Dr. Meffert spoke of integrating trauma treatment to enhance HIV care engagement in low resource settings – work she has executed for years in East Africa and with the KEMRI-UCSF partnership Family AIDS Care and Education Services.

FACES was well-represented in Amsterdam. In addition to seven posters, Carol Camlin, PhD, led a satellite session to showcase the special issue of the Journal of the International AIDS Society dedicated to mobility and HIV, of which she was an editor. Population Mobility: Challenges for Universal HIV Testing and Treatment featured the work of 11 researchers around the globe dedicated to exploring how mobility impacts HIV transmission, treatment, and retention in care.

“Our [HIV-positive women] patients were dying from neglect, abuse, and murder. They were unable to take their meds,” said Dawson-Rose as she explained taking a mental health and holistic trauma-informed approach to treating patients.

Despite these clinical observations, she continued, “one of the challenges of this field is that evidence of effective trauma-based HIV care is still building.” 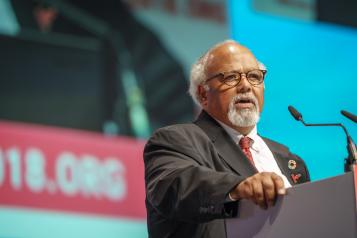 Dr. Eric Goosby speaking at: Seizing the moment for TB: Current challenges in TB care and in TB and HIV integration

An area where evidence was more clear was found in the groundbreaking results from Dr. Diane Havlir’s SEARCH trial – a patient-centered care intervention model that utilizes a non-communicable disease approach at health fairs to testing and treating HIV, offers universal rapid testing, viral load counseling, and antiretroviral therapy, combined with mobile phone triaging of care and reminders. Particularly celebrated was the mortality data presented – among HIV-infected persons engaged in the interventional arms of the trial it was 21 percent lower than those in control groups – and overall mortality among all persons was 11 percent lower among those in the intervention groups.

The broad test and treat campaign continues to highlight how essential early testing is for individuals – something that other UCSF researchers are addressing from new angles for key populations. Sheri Lippman, PhD, whose work on HIV self-testing was featured by ARI earlier this year, continued to promote her findings in a session – Can HIV Self-Testing Make Testing More Equitable?: Perspectives from High Income Settings – that also included investigators from the UK and Australia. With active participation from attendees in the village, a key takeaway message resonated with the crowd – engaging the communities you serve from the inception of studies is key, especially those most vulnerable and whom would most benefit from the privacy and ease of the newer self-testing models, such as minority men who have sex with men, migrant populations, and transgender persons.

Basic and translational research sessions featuring some exceptional vaccine and cure research from UCSF investigators were packed with attendees. Dr. Henrich, in a session titled How Far Are We From HIV Remission, detailed the work of very early ART initiation during ‘hyperacute’ HIV infection that he executes in the Division of Experimental Medicine. Dr. Steven Deeks, UCSF Professor of Medicine, led an overflowing oral abstract session, ‘Strategies for Cure: Pitfalls, Possibilities and Promise’ co-led by Dr. Henrich. Dedicated to vaccine and virus eradication advancements and highlighting the challenges still facing researchers today, Deeks underscored that curative clinical and primate studies still show viral rebound even in cases of extremely low reservoirs – “we need to account for inclusion of therapeutic vaccines in curative efforts to kill the reservoir and control replication,” he emphasized.

Closing the conference were former President Bill Clinton and U.S. Representative Barbara Lee, both of whom have been long-term supporters of the annual meeting and have used their considerable political influence to lobby for funding, awareness, education, and research in the field of HIV.

Both expressed delight and excitement at the news of the AIDS 2020 conference being held in the United States, and the Bay Area in particular – an opportunity, Lee said, “to celebrate the work being done in the continued fight against HIV locally and globally.” We couldn’t agree more.

See also: MedPage Today interviewed eleven UCSF investigators about their research at AIDS2018 – check out the full roster on their site.